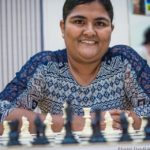 I have been playing chess for more than 16 years. I am an International Woman Master and have strong chess skills. I have trained various kids from beginners to intermediate. My current FIDE rating is 2196 and USCF rating is 2266

ayer in University tournaments and college events. I earned university rank of 42nd among thousands during my Masters in Computer Application.

After my studies I worked as ESRC Research Assistant in Brunel University, Uxbridge, Greater London for 7 Months. CHREST is a computer model which is developed for the findings of cognitive psychology. We can study about the psychology of chess players and the cognitive development using CHREST. Pattern recognition, machine learning and data mining are the important work in the area. Work involves collecting data from chess positions and analysing with the computer model called CHREST.

I am an active coach in New York City for past one year. My current goal is getting a Woman Grandmaster Title and I have one woman grandmaster norm. My interest is to play professionally and teach to different generation

PUBLISHED ARTICLES about me: